The terminal (and Bash) are some of the most useful tools you will learn to use in your CS career. If you're new to programming, they can appear daunting at first, but once you get the hang of them, you will be able to perform a variety of functions in the terminal using only text.

This guide is meant to serve as a primer to get you started. Your instructor or TA(s) should be able to help you with using the terminal to work on your projects, or you can always Google what you need help with to try to figure it out yourself!

What is the terminal? 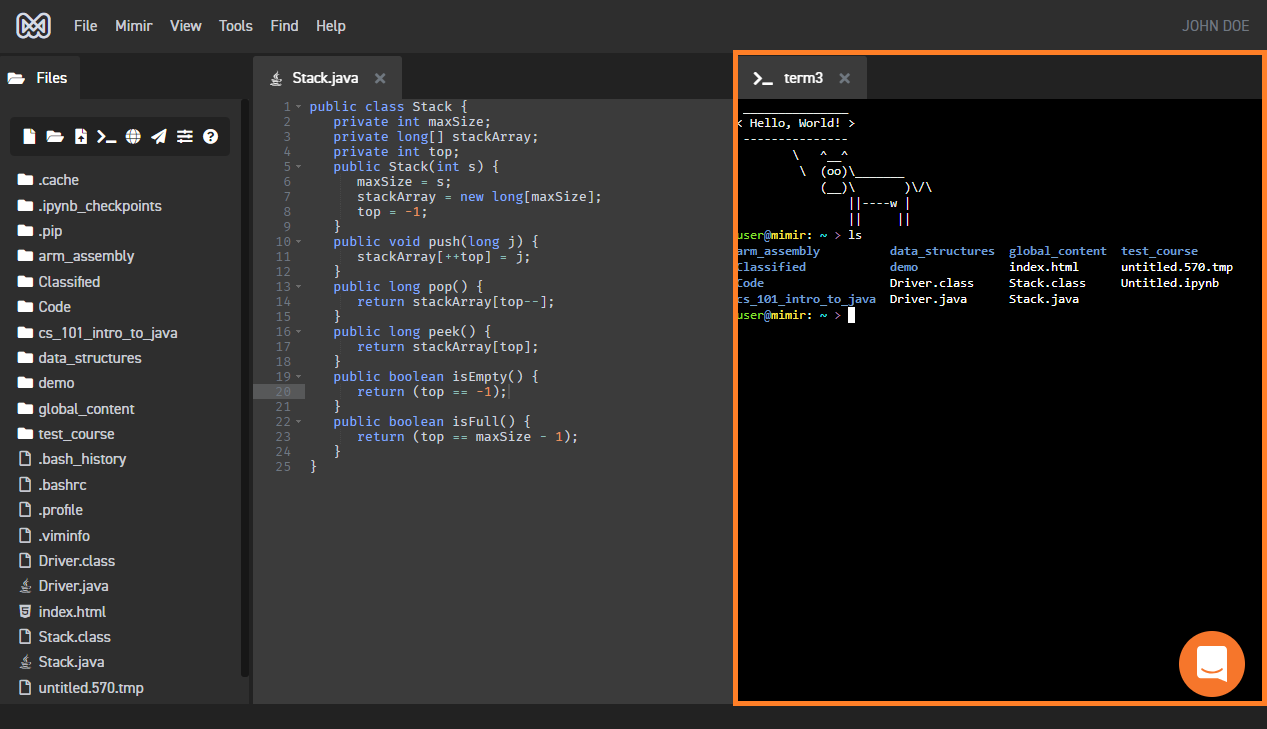 The terminal is the area highlighted by the orange box above. This is where you will be typing in bash command.

If you close your terminal window you can open a new one using the file menu.

What is Bash? What is a REPL?

Bash is a type of shell for the Unix-type operating system. Shells are simple interactive computing environments (also known as a REPL), generally text only, that can be used to take user input, evaluate it, and return the results to the user.

REPL is an acronym for Read, Evaluate, Print, and Loop:

The way we will use Bash is by calling commands in order to accomplish what we want.

We can accomplish this by typing in our commands, and hitting the Enter key to execute the line.

Let's look at what the basic command structure looks like:

All commands that you will run via the command line interface will follow a similar structure:

Let's break those down:

The actual command you are running. This can be a variety of words and phrases depending on the operating system you use.

These are options (also known as flags) that cause a command to run slightly differently. This can cause many different things to happen based on the options you select, check the man pages for the command for more info.

This allows input redirection, meaning you can use the contents of a file as the input for the command. It is useful for a variety of reasons that we will look into later.

This allows output redirection, printing what would normally go to the terminal log into a file with the given name.

The pipe character ( | ) redirects the output of the command to the next command in the chain. This becomes very useful when we begin using new commands as well as chaining them.

The clear command clears all of the text from your terminal screen.

The help command will bring up the basic Bash help text.

The man command will bring up a manual for a given command. This can be very useful for exploring new commands, as it will show flags and arguments you can pass to the program! Example:

cd <directory>
The cd (Change Directory) command will change your working directory to the directory you pass in as an argument. Special operators for cd (and other file structure commands) include:

cp <file0> <file1>
The cp (CoPy) command will copy a file from file0 to file1, overwriting the file in the file1 location if it exists

mv <file0> <file1>
The mv (MoVe) command will move a file from file0 to file1, overwriting the file in file1 location if it exists. You should use this command to rename files!

rm <file0>
the rm (ReMove) command will remove a file, given by the file0 argument. Use the '-r' flag to remove directories!

more <file0>
The more command will print a limited amount of file0 to your terminal, and give you controls to move through the file, scrolling through it as you hit enter or spacebar.

curl <url0>
The curl command will fetch a webpage or web resource given by url0, and will print the data to the terminal. You can use output redirection to put this data in a file!

Now that we have some basics down, how do I run my program?

Because Mimir Classroom supports so many languages and frameworks, there is no single solution for running a program. There are many ways to run each type of program, and each instructor may have a different preference for which method(s) to use - so your best bet is to ask your instructor.

With that being said, here are some very basic examples (CAREFUL! This may or may not be how your instructor wants you to run it!) for how to run certain language types on the MimirIDE: