Users now have a better viewer with simple editing tools like cropping and rotating. 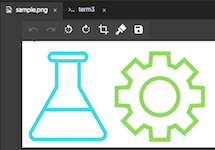 Python Library Updated for all Versions of Python NLTK

NumPy
A the fundamental package for scientific computing with Python. It contains among other things:

SciPy
A Python-based ecosystem of open-source software for mathematics, science, and engineering. In particular, these are some of the core packages:

Matpltlib
Matplotlib is a Python 2D plotting library which produces publication quality figures in a variety of hardcopy formats and interactive environments across platforms. Matplotlib can be used in Python scripts, the Python and IPython shells, the Jupyter notebook, web application servers, and four graphical user interface toolkits.

The latest version of Node.js was added which improves performance.